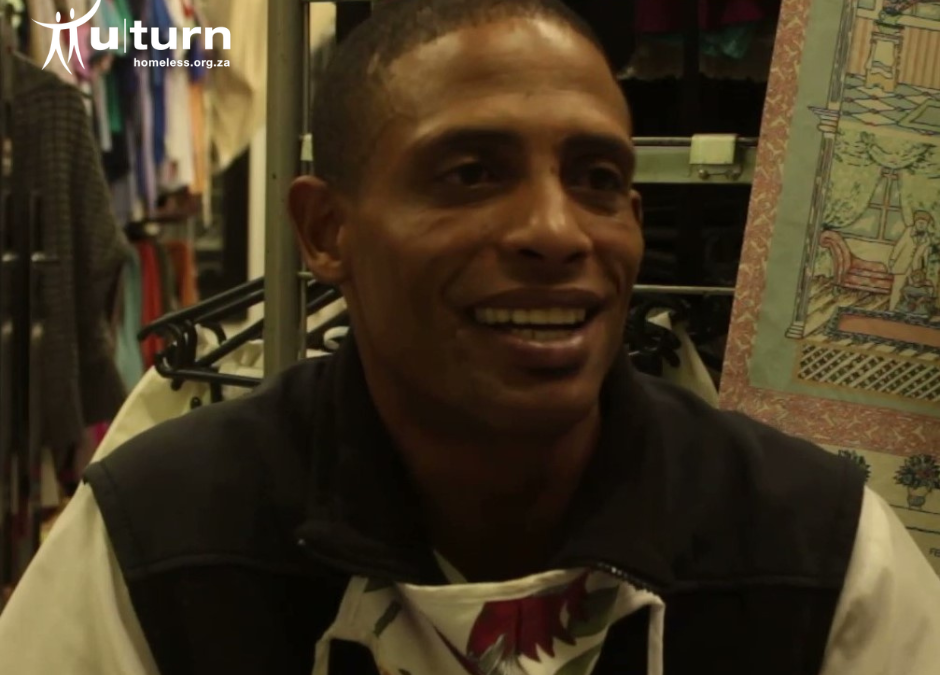 Dimitri’s life was changed when he was given a U-turn voucher. Today he is sober, employed and independent.

He used drugs from the age of sixteen. Due to the strain his substance abuse placed on his family, he was not welcome in his house anymore. Living rough on the streets became Dimitri’s reality.  The prison brought such comfort and protection to Dimitri, that he would break the law to avoid facing the realities of living on the streets. For fourteen years Dimitri was entangled in the web of substance abuse.

At the age of thirty his life took a turn for the better.  While living on the streets, there was a couple who would frequently give Dimitri a meal and a U-turn voucher. The couple never gave up on Dimitri, even when he would discard the vouchers.

Dimitri came out of prison with a longing to change his life and to be employed. He went back to the couple. They gave him a U-turn voucher and referred him to our service centre in Claremont. Dimitri went through all the phases of the U-turn programme and in the beginning of this year graduated into independent employment as a U-turn sales associate.  Seeing people going to work and providing for their family was something Dimitri had dreamt of experiencing himself, today he’s living his dream.

His dream for the future is to open his own gardening service. He says that he already has two gardening machines at home. He is currently saving to make his next dream a reality.

A few weeks ago he moved into his own apartment. He loves the feeling of independence and savours his privacy.

Looking back on his past, his life has changed enormously. It has been encouraging for him to see how his friends and family have a big respect for him. His family has encouraged him to have his own place making him independent. Although Dimitri’s father has passed away, his mother is still living. He is reassured that if anything should happen to her, he would be able to stand on his own two feet and not go back on substance abuse nor the streets.

Dimitri says that he is happy for the journey he has gone through because it has shaped him to view the world differently and it motivates him to keep focus. Through his journey, he is able to share his story and motivate others.

After more than ten years of U-turn vouchers, we are partnering with MES to launch the Mi-change voucher, which are redeemable in the Northern and Southern suburbs, as well as the Southern Peninsula at both U-turn and MES centres. It now also offers more basic needs services but as always, the voucher connects people with a pathway out of homelessness. To find out more go to Mi-change.org