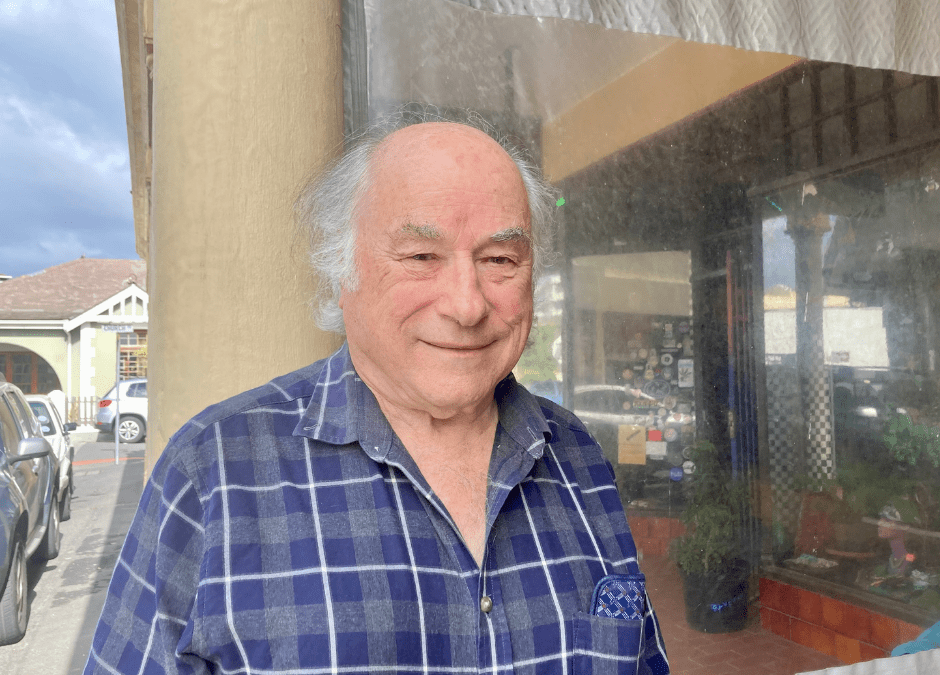 Peter Corbett is the chairman of the Muizenberg Improvement District (MID). We met for coffee at Joon’s, a well-known Muizenberg shop, to talk about homelessness and the MIDs support for the U-turn service centre. He’s easy to talk to, and was more interested in my own story before we could talk about himself.

According to Peter homelessness in Muizenberg goes back generations. In the beginning it was mainly white homeless people, over time this has evolved to become more diverse. Since COVID the numbers have increased. There are currently around 60 to 80 homeless people living in the area.

Peter has been actively involved in politics most of his life. He has always had a liberal view of life and has fought against apartheid. His political roots run deep with his parents being part of the Labour Party in England. He has always had an equal society point of view.

When Peter became the MID’s chairman three years ago, the need for a U-turn service centre quickly became apparent. Muizenberg is a melting pot of middle class and lower middle class residence, who comes face to face with the realities of homelessness on a daily basis. Peter’s response towards the homeless comes from two perspectives. On the one side, there is his compassion for people who are in need of help. On the other side, he is responding to the MID constituency, who are frustrated by the realities of homeless they face. Both needs has driven Peter to address  and find a more permanent solution to homelessness in Muizenberg with a Service Centre which launched last year March.

The road to a U-turn service centre in Muizenberg was not easy, there is always the “not in my backyard” response which can make finding a venue or signing a lease difficult. But with perseverance the Muizenberg Service Centre was birthed.

Peter also believes that we cannot run a Service Centre for the homeless without a Safe Space as a reasonable alternative to life on the streets. A safe space is temporary accommodation facilities for the homeless, equipped with beds, ablution facilities and  meals. Cape Town mayor, Geordin Hill-Lewis, while he was still campaigning made promises to address homelessness. Peter is holding him  accountable for his promises.

Peter foresees setting up a safe space for the homeless will again run into challenges around venues, but he believes it is worth the fight to see the homeless with better living conditions, not facing the harsh weather conditions or the dangers of sleeping outside.

When Peter was asked what his vision was for the homeless in Muizenberg, he said it might be unrealistic for them all to be rehabilitated and reunited with their families. Instead, he would encourage those experiencing homelessness to take the first step of staying in a safe space  connected to a programme like U-turn’s, so that they can experience better living conditions and then overtime, work towards that ideal where they can leave the streets behind for good.